My Attempt at a Setup Tutorial, Review and Rant All-in-One

I finally decided it was time to try the “Z-Wave Razberry-Pi GPIO Daughter Card”. I have been extremely pleased with the Aeon Labs Z-Stick so it was hard for me to fork out the almost $80 for this miniature card. The final decision was made after reading their API documentation – even though it had a few grammar mistakes and odd wording for a technical document I was really excited about what the Daughter Card had to offer. My understanding was that you plug it in and immediately have a web service to start making calls to. How great is that? 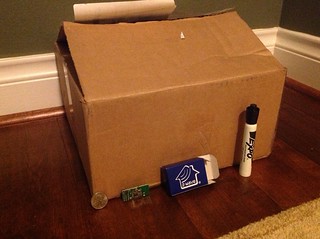 I am going to complain about price again. I understand the hurdles; they have a limited market and it looks like they paid some licensing fees (and the actual manufacturing of these “custom units” in small quantities doesn’t help) but I was seriously pissed off from the moment it arrived in its 12” x 12” x 6” poorly put together box. I wanted to love this thing, it would make it easier to be lazy, but if a company cannot figure out how to ship an item it is a bad sign and “you are going to have a bad time”.

As I opened the already half opened box (little bit of cost cutting on the tape), I kept hoping for some reason that I paid for a box labeled 1lb to be delivered to me. Maybe I was lucky and I would get a free T-shirt… nope just a few packing peanuts. The “Razberry” card was in a tiny 1″ x 1.5″ x .5″ box wrapped in paper instead of the usual static guard pouch.

At this point I tried to clear my head – this new toy was going to make life wonderful – I mean come on, who doesn’t like web services? Time to install. I followed the instructions on the sheet and ran their install program. It was exciting asked me to confirm a TOS that I could not readily read and asked me to join their newsletter. Then nothing happened. The promised server was not running on port 8083. Ok this problem is fine, I like troubleshooting. Start with the mandatory reboot (even though we are on linux) and what do you know, I now have a http server instance at port 8083 just as promised. Time to associate the new dimmable switch. With the Aeon Labs Z-Stick, all I had to do was take out the usb stick, walk to the item I wanted to pair, push the button on the stick and then push the button on the item I wanted to pair. A quick glance at the “Razberry” Daughter card and I noticed no easy button. Scoreboard for Aeon Labs (and while we are giving them a point, give them another because they know how to ship an item).

So I go online and find the pairing manual, which says to push the button on the device and it should pair, but then I see another document that says push it three times. I figured I would be safe it I just hit it 5 times. Keep in mind how annoying this is in comparison to the Aeon Labs Z-Stick. I am having to hold my Raspberry Pi and my Laptop by the wall plug. Giant PITA – seriously buy one of these batteries if you don’t have one already (very worth it).

Nothing was working … no associations … just a whole bunch of “no acks” in the debug window. Time to start troubleshooting – ok I read that this used the Pi’s internal serial port. The same one I messed with last week with my Arduino. Luckly when reading that documentation I discovered that you couldn’t use the default serial values and still have another serial connection later. You had to disable it in both /etc/inittab and /boot/cmdline.txt. My guess is the install script couldn’t handle an alter setup and it didn’t care enough to make mention of it. I went to my /etc/inittab and commented out the last ‘gtty’ line with # and deleted the two references in the cmdline.txt file then gave the Raspberry Pi another reboot. There was not a single error that alerted me to the fact that it could not connect to the serial port. But now that the port was available, I received different messaging when I hit the button to associate a device. After about 5 minutes, I got pissed and walked to another switch and wasted 5 more minutes until Ali walked in and “turbo clicked” the switch 3 times. It was a Wednesday night miracle after almost an hour I was dimming switches. Not the huge time save I thought but still it is working. I move to the next switch not super far away and associate that bad boy with the “turbo click”. It was about that time that I realized that I lost connection to the other switch. The range appears to be half of what the Z-stick has. Disappointed that I would not be able to use it until I associated other devices every 10 feet, I quit for the night. To be honest, I am not sure how long it will be until I pick it up again and actually try out the API.

For now, even though it looks cute on the Raspberry Pi, I have to give this the “Razberry” Daughter Card a fail. I look forward to their firmware updates.

Note: If the text does not change to the red text below, your serial connection is not working.